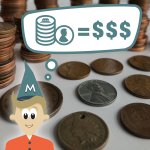 Maybe your grandfather left you his rare coin collection in his will. Maybe you have 20 Mason jars in the back of your closet that you’ve been filling with loose change. Or perhaps you read an article about a penny that sold at auction for $204,000, and you remembered that lucky penny you spotted on the sidewalk yesterday. Whatever it was that caught your interest, now you’re wondering that if that penny in your pocket might actually be worth more than one cent.

So now what? What exactly are you supposed to be looking for? Sure, there are lists out there of the most valuable pennies – the ones that fetch a hundred thousand dollars. But those lists are not exactly helpful to a new collector. You don’t have time to compare your pennies to the list one by one.

Instead, you need to know what qualities you should be looking for in a penny – what makes a penny rare? Then, when you have a penny you think may be valuable, you need to know if there are buyers out there who want that coin. Luckily, Mavin is here to help!

How to Evaluate Your Pennies

Start by looking at the year stamped on your coin. The older a penny is, the more likely it is to be rare because old pennies get filtered out of circulation.

Look for a mark on the coin indicating where the coin was minted (or produced). The mint mark will appear in different places on the coin depending on the design. For example, on a Lincoln Cent the mint mark is below the date. Look for a small P, D, S, or W mint mark. Sometimes they’ll have no mint mark, which means it came from the main mint in Philadelphia.

How well has the penny been preserved? Has it kept its lustrous red shine, or has it faded to a duller brown color? This can affect its worth.

Over the years, the U.S. Mint changed the chemical composition of the penny several times. Some metals were used for very short periods of time, making those pennies rarer and more valuable. For example, there are a handful of Alumnium pennies made in 1974… and zinc-plated steel was used in 1943 to save other metals for the war. Older pennies made of copper, brass, or bronze look distinctly different than a modern penny made of copper-plated zinc.

Take a closer look at any pennies that seem “off” somehow. Mistakes made during the minting process often result in small batches of “error coins.” One example of an error coin is a double die penny, where overlaps appear in the penny’s design.

The U.S. Mint also altered the design of the penny many times over the years, and the size. The penny used to be much larger than it’s current size. Penny designs can be divided into two groups: Large Cents and Small Cents. 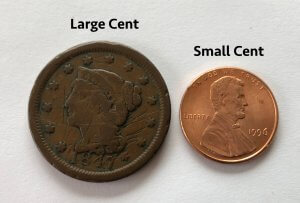 Once you have completed this process, if you believe you have some valuable pennies in your collection, it is time to see how much they are worth.

Take this 1902 Indian Head Cent… it’s in good condition… it doesn’t have a mint mark… no errors or major flaws. 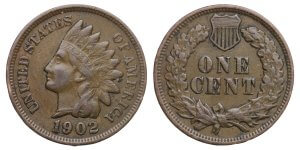 So when I enter “1902 Indian Head Cent” into the search box, I learn that the average value of this penny is $12.13, based on similar pennies that have sold recently. Scrolling through the results, I get a better sense of how much my penny is worth based on the condition of other pennies sold. 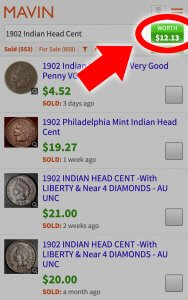 I can use the checkboxes to pick a few comparables that are just like mine. This gives me a very accurate estimate of the penny’s value.